Don't be deceived by the stacks of burgers and pizza slides on The Brothers Buoy's Instagram Feed. The Buoys, AKA Graham Burns and Jackson Reed Cook, are NOT your standard food Instagrammers.

Instagram is a platform for the duo to document their adventures through the food scene of Brooklyn – and pass acerbic comment on the absurdity of the food Instagramming community to which they belong. With a satirical sensibility and an atypical and even anarchic approach, The Buoys are building a following even amongst those who with their hands on their heart will tell you food should be eaten NOT photographed.

We caught up with the Buoys to talk about the absurdity of documenting what you eat, Brooklyn street style and why you have to love what you post.

How did Brothers Buoy come about?

Graham Burns: There were originally three of us and we worked together at Apple. We worked out we all had the same day off – Fridays. So we decided – drunkenly – that we should go to brunch on payday every other Friday. That turned into reviewing the places for our friends and that turned into having a podcast.

We kept one-upping each other and it kind of snowballed into Brothers Buoy. The weirdest thing is that we kind of followed through with it and made it happen. Which is rare!

A garnish should enhance the drink, they said…

Jackson Reed Cook: I think the reason Graham and I have stuck with this as long as we have is that, he and I both have creative backgrounds. I went to school for design and Graham went to school for video production. So I think it was just nice for us to have this thing that turned into a creative outlet for us both.

We could go on the weekends and do something creative over a shared interest of food and the restaurant scene.

Where in New York are you based?

Is Brooklyn a hotspot for food Instagrammers?

J: I think Manhattan is the epicentre of what is cool in the food community but Brooklyn is getting there. I think the Williamburg..

G: It depends on the type of cuisine. If you are talking about fine dining then definitely Manhattan, but if you are looking at chefs trying new things or opening up more casual restaurants or New American, or people starting up their first restaurants and doing some interesting things, then Brooklyn is becoming or is maybe there in being big for that. 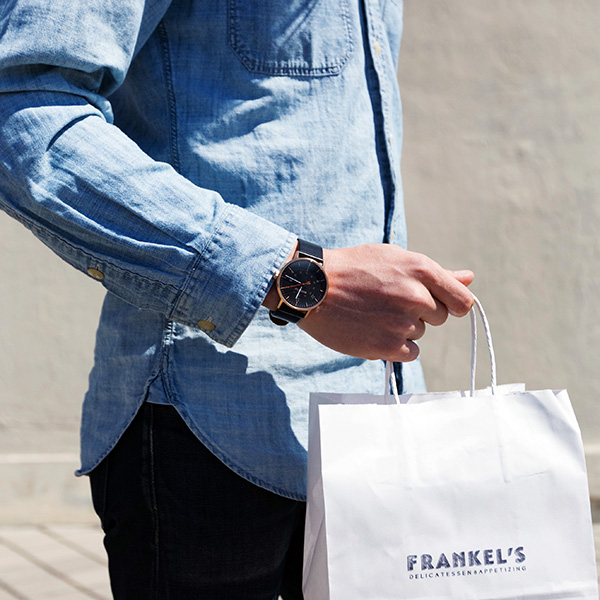 Are Americans as obsessed with brunch as Australians are? Brunch is a huge thing here.

I know a couple of Australian style cafes have opened up in New York – have you tested any of those out?

J: Yeah we have, it’s funny, one of the first places we ever went to was over on Avenue A and it was Australian. If I go to a place and I am not sure if it is Australian, if you look on the menu and there is a burger with beets on then you know it is Australian!

You have expanded your focus beyond brunch now onto the Brooklyn dining scene, what would you say the objective of The Brothers Buoy is now?

J: One of our objectives is to take a satirical and critical angle on being a food instagrammer – almost call out the community. Because if you really look at it and think about what it is, it’s absurd. It’s this weird thing that people are getting all these followers for taking photos of food – somebody else’s hard work.

You are looking at this culture of photographing food but you guys are also participating. From being in that scene, what do you think drives this sudden mass desire to document food?

J: I don’t know! It’s interesting, we constantly find ourselves looking at what is popular [on Instagram].

It’s gotten to this place where [Instagrammers] are pulling food apart and doing close-ups of goopy cheese.

G: There is something in trying to capture something that is a bit fleeting.

It is also going to be a little bit different every time, the same dish is never going to come out the exact same way. 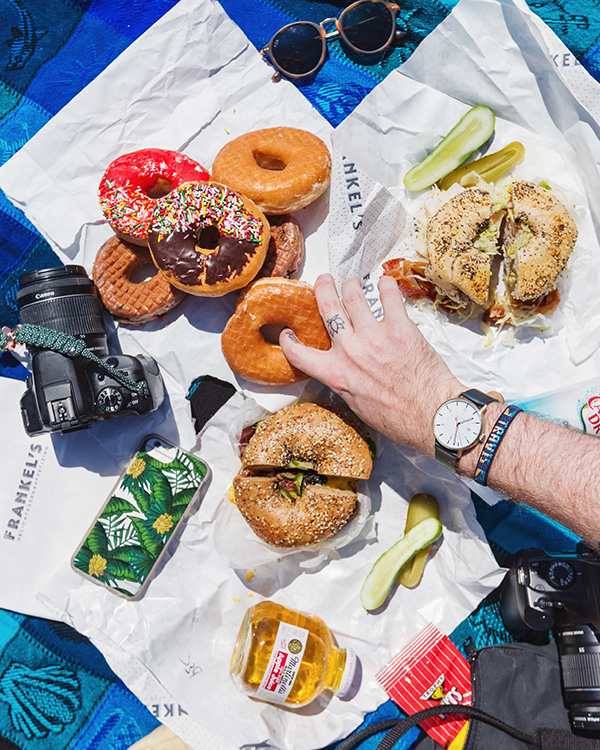 How would you describe what you are trying to convey in the images you take?

G: It’s not just putting the food on a pedestal but composing it in a way that it doesn’t always necessarily look appetising, sometimes that’s not what I am going for. But a Brothers Buoy photo should provoke some kind of feeling and stand out from the other photos in your Instagram feed.

I think ultimately the ideal situation is to create an image that works on a couple of different levels. The food is maybe the main focal point but perhaps the background is also in consideration and the foreground, creating an actually interesting composition. The background can provide as much meaning as the focus.

J: I think the other thing that we will do a lot of the time is make visual jokes, or try to present these ideas that we have, or opinions that we have visually.

G: An example that pops into my mind is that we did a nice overhead of a really pretty table, a classic set-up, but then we had a woman stick her finger into the avocado. I just thought it was so funny as it was taking this really pretty thing and then just being like ‘I am just sticking my finger in this’ and it kind of just makes you do a double take on the image and be like ‘what is going on here?’

J: It was a comment on the fact that people always do these images of people interacting with food and it is supposed to be this really natural photo – but it’s not. It is almost taking it that one step further. 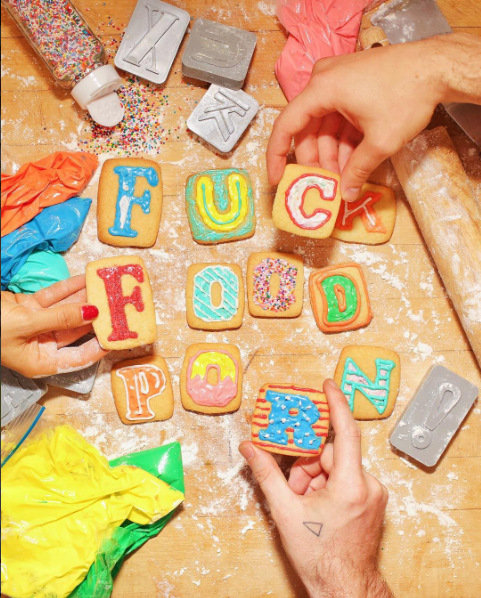 There has been a real trend in the last say 5 or so years of American style food infiltrating the food culture in Australia – wings and pork ribs and burgers and American style slice. It kind of looks like a lot of the food that you guys are documenting.

J: To be honest, I think what is on our feed is food that we like. That’s another thing that sets us apart from others in the community. Instagram has become a platform for basically people to promote whoever gives them free stuff. There is no integrity to the recommendations or what they are showing…

J:… Not all of them. And that’s fine. That’s what some people want.

But what is on our feed are all things that we really, really like. We are not going to put anything on our feed that we haven’t eaten ourselves – usually both of us. A lot of the time it is places that we have been to a lot of times.

21 Greenpoint is an example that is near us, and it is in our feed so much because we have gone there 3 or 4 times at this point and taken photos there. We love it that much. It is not like we went there once and took photos and spread it out.

You guys have quite a distinctive sense of style which is obviously conveyed by your images but also the photos that have you in it. How would you describe your aesthetic when it comes to fashion?

[Laughing from both of them]

J: Pretty different… I am probably in front of the camera more than Graeme is. If you see us on the feed you see me because Graeme is taking the photos.

I don’t know, I have a fairly eclectic sense of fashion. I really like graphic tees. Something I really like to do is support small upstart clothing brands.

We have featured a lot of pins or t-shirts or hats from really small up-and-coming brands. It isn’t necessarily that we are working with them, it is just that I find them and wear their clothing and it is thrown in the photo. I just like what they are doing and don’t need anything in return.

What was it that attracted you to Mister Wolf watches?

J: I first found out about you guys because our friend Caleb Thill was wearing one once when I saw him and thought it was such a nice watch. I loved the detailing and had never heard of the brand so I asked him about it.

I was interested in your brand because it was new and your product was good.

G: And they aren’t crazy expensive.

J: The whole thing is really reasonable, and I love that they are hand-assembled. And I was just attracted to the design and the detailing and I was surprised I hadn’t heard of you guys before.

Ok guys. It seems like Spring is finally joining the party after we have been texting it “ETA?” for the last three weeks. So break free of that hangover that’s clutching your head to your pillow with shackles made of eye crust, and get ya ass outside. It’s time to wear shorts and sandles even though the weather isn’t quite warm enough. It’s time to bring all the damn kids/dogs to play in the park to get way muddier than you were planning on dealing with later. It’s time to get all your friends and go wait outside @fiveleavesny for three hours simply because it’s what everyone else is doing. And for sure it’s time to have the first official Sunday-funday of 2017. Don’t let us down. Don’t let us down.

What’s on the roadmap for Brothers Buoy?

J: We are broadening ourselves out. I think we have broader interests beyond food. It feels like we are bound for collabs in other spaces.

Ultimately, we are a pretty talented bunch. We just brought another guy into our group who we are calling a producer. He also has a film background and is a motion graphics guy, so we are able to take on clients.

We are developing is our online personalities a bit more. We have some ideas for some web series that we are hoping to pitch to people, travel content. We also have a podcast idea that has been in the bag for a really long time that we would love to get going, not necessarily comedic stuff just informative and interesting.

The third thing is that we have an event company that we recently founded with four other people.

I think we want to start doing more content creation for brands rather then just going to restaurants and taking pictures – we know we can do it. We have an angle and a vision and a voice.

New York clothing brands the Buoys are excited about?

We love Pinpoint, pins made in Greenpoint, and Feltraiger, a Brooklyn-based clothing brand.

Right now the two places we can be spotted the most are 21 Greenpoint and ALLSWELL.

We find ourselves at @21greenpoint so often that it’s LITERALLY impossible for us to know whether or not this photo is a #tbt or if we are at the restaurant currently as we write this. We have no idea.

Favourite meal in the last three months – where as it and what was it (you can each answer this separately!)

I think that we would both say that the best meals that we have had in the last three months were had during our trip to Todos Santos, BCS Mexico back in the end of February. Pretty much every meal we ate down there was so fresh and delicious, we think about the food down there constantly.